With Twitter being down, and feeling the need to spew out characters to the Twinterweb, I opened up trusty MarsEdit and decided to update my good ol' blog.

That's when I realized how much Twitter had taken over.

I hadn't logged into my web interface in a bit, so I had a WordPress update, 4 plugin updates, and a bunch of pending spam. I cleared that out and then started crafting a post in MarsEdit. As I went to post those fateful words, MarsEdit choked on an XML-RPC error complaining about bad content.

I quickly scanned through recent post, looked for bad characters. I used the Googles to try to find an explanation. Finally, I noticed that each page of my blog was spitting out a PHP warning (because, you know, PHP is pretty dumb, and I'm too lazy to have turned off warnings) that it couldn't download my latest tweets from Twitter.

One quick click of "Disable" and MarsEdit sprung back to life.

At which point, it dawned on me, that at this point, Twitter being down is like having part of the internet's routing being down. It's tied into so many systems, and so much traffic/content flows through it, that when it goes kablooey, all that content has to route elsewhere. Which then floods those systems, and they start to struggle and burst at the seams a bit, and then folks overflow into another system, and so on.

Until, the end result, of course, is that Twitter was breaking my site. 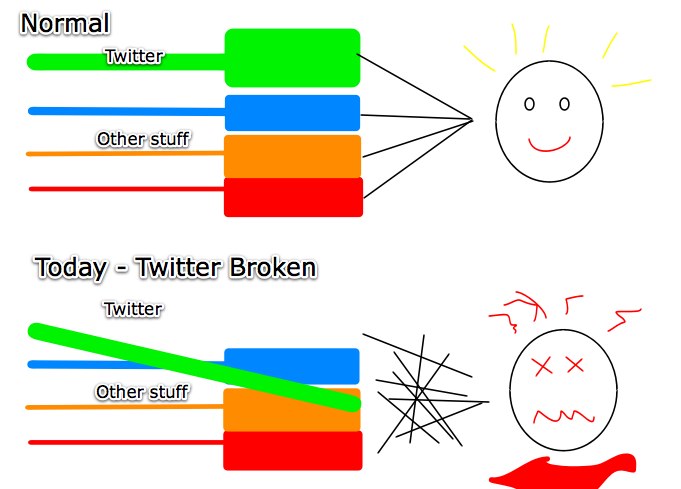 My site, that is, not Twitter, which is still down.