The much awaited ... stuff

It's been a busy few weeks. The biggest news is probably my latest purchase: I got my first non-PC in the form of a MacBook Pro. I'd been looking at getting a laptop for a while, mostly because my existing laptop is old, underpowered, has a half-working keyboard, and had been resigned to sitting on my stereo so that I could stream music to it. I couldn't even bring it anywhere, as the battery life was simply miserable.

Working at a web hosting company, spending a majority of my day ssh'd into a Unix box, I'd gotten very comfortable at the command-line again, much like I was back in my college days. Between the command line and the browser, I didn't really use any major Windows applications at the office or at home. I use MS Office, occasionally, but I don't even use that at home (where I use OpenOffice). My PC is still a great box, but it was a glorified game machine.

Taking it one step further, I'd realized how much of my life really is in the browser these days. My mail goes to Gmail; my calendar is Google Calendar; my RSS feed reader is Google Reader. A few years ago I ranted that I couldn't see ever moving completely to a thin client/browser world. Granted, it was in the middle of a major Comcast outage, where they weren't sending any traffic to Yahoo!, which is pretty significant. These days, while there are minor outages, it's rare that I can't get to my data online. When I can't, I can get it via my cell phone (and once Google gets Calendar working on a phone, I'll be pretty much set). Finally, with Google (and Microsoft and Yahoo!) exposing your data in interesting ways (RSS, iCal feeds, private HTML), you can always pull it down into your thick client and access it offline, should you need to.

I've also had a desire to get creative again, whether its restarting the podcast (which will happen), blogging more, working on my website, or just generally brainstorming other ideas, I've needed a way to get untethered from my PC. It's cold in my little office during the winter, and I can't neatly multitask in front of the TV. With most of the creative ideas requiring the authoring of at least a little bit of code, I was looking for a laptop that would let me use my friendly Vim application to hack some HTML, CSS, or Perl.

All that put together lead to me looking at a Mac. Not because they're trendy, but because it's the nicest Unix machine you'll see. OS X is a very pretty, and functional, interface on top of a Unix backend. I can take my laptop to work and scp files from a terminal window to our data center at rates that greatly exdeed anything I can get over FTP. I can pop open a terminal window and quickly turn on apache and mess with some Perl code before I upload it to my website. I can open up GarageBand and pull together a podcast a little more easily than I can in Audacity on the PC. The ability to neatly run Windows in either VMWare or Parallels while inside of OS X is what pushed me over the top. (Actually, it was one of my co-workers showing me IE running in coherence mode inside Paralells, which meant he could have IE next to Firefox next to Safari on his desktop, allowing him to test 3 major browsers at the same time. Very cool.)

So, I pulled the trigger and picked up a MacBook Pro. It took me a little while to get used to the differences between the Mac and Windows, but the learning curve to being productive is really shallow. I've nearly replicated all of the functionality of my Windows PC, but with the ability to do it from anywhere in my house. I can listen to music streaming from my iTunes library while I type this up, waiting for Heroes to buffer up enough on the DVR so that I can watch it without commercials. Soon, I'll probably throw together another episode of my podcast, which I can do significantly more easily now that I don't have to start up a bunch of different applications (I'm still figuring out how to make the built-in mic work, as it seems to record to quietly).

So, I hope that my new found freedom will allow me to be a bit more prolific. With work and general life stuff, I've had to cut back my posting at The House That Dewey Built -- I've sort of just become the tech guy and will let Jeff and the new folks concentrate on posting (though, I might have to throw something up there when the feeling hits me). I've got plans to at least throw something up at ryantoohil.com and let it be my testing ground for learning more CSS and JavaScript. I'm feeling a bit more invigorated, which is nice.

I actually want to build my home page around my little Mii off of my Wii. I haven't gotten a good screenshot yet, but here's an approximation. And yes, I'm a huge dork. 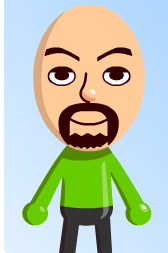 Hopefully, this desire to be creative will last. I'm going to try to get something up most days this week. I'm thinking that I'll finally revisit the "So you want to have a web site" series. I'm planning on getting up a Dear Leader-centric podcast.

If you're still out there reading, feel free to leave a comment. I'm curious to see how many are actually reading this. Checking my logs, I've got at least two readers in Google Reader (1 is me ...) and 2 in NewsGator. If I was smart, I'd move to FeedBurner so I could track it, but I've got no desire to do that just yet.

That's all for today. Heroes is starting, and I'm hoping that they'll recover from their recent doldrums and put together a fun episode that doesn't smell like fish.